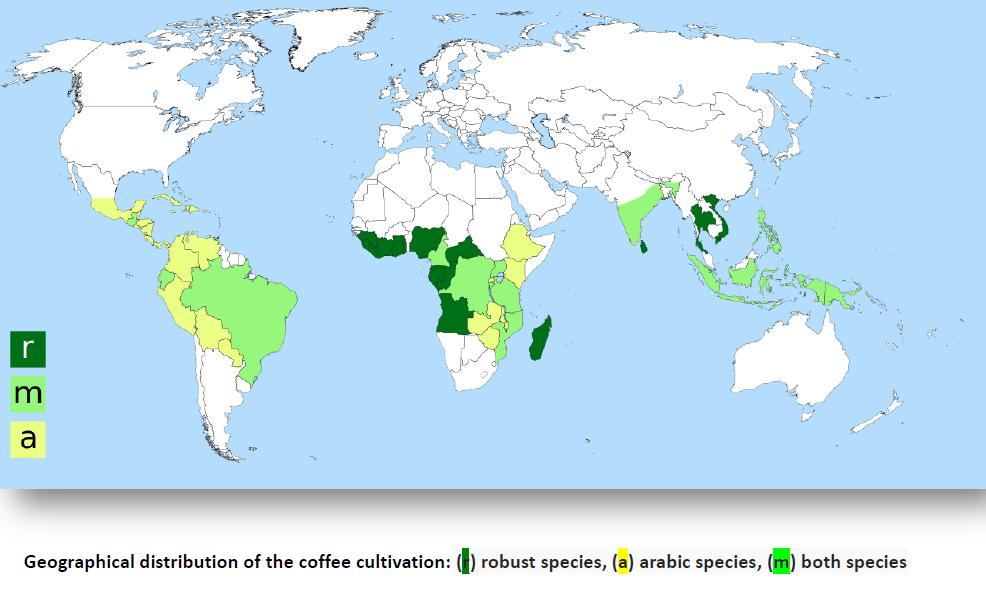 Approximately, the production areas are represented on the map below, more specified data may be found on the International Coffee Organization (ICO) website. According to the statistics contained therein, the world largest producers are, in order, Brazil, Vietnam, Colombia and Indonesia. Following, with a variable order, depending on the years, Mexico, Guatemala, Honduras, Costa Rica, Nicaragua, El Salvador, Ethiopia, Cameroon, India and Ecuador.

Arabic and Robust are the most common varieties of the coffee plant.In the south American area the production of Arabic prevails, covering ¾ of the world production, while in Africa, India, Indonesia and Vietnam prevails the Robust.We select our coffee directly from the producers, taking care to verify the quality, the hygiene-sanitary standards, the tracking regulations, and we expertly transform it without using additives nor conservatives, making sure that the size of the raw beans isn’t beneath the measure of 18. Our major suppliers are from Brazil, Costa Rica, India and Cameroon, for suppliers we do not intend the wholesalers, but the ranches that own the plantations, to combine the best price and quality.

A line dedicated to your business

A line of high-quality coffee, made with the best blends on the market

Your Local deserves a distinction even in coffee. We provide mixtures and the quality of the product, but the brand will be yours!